12. RELATIONSHIP BETWEEN CLOSED-LOOP TRANSIENT DAMPING AND THE OPEN-LOOP FREQUENCY RESPONSE

Closed loop will be stable if the open-loop frequency response exerts positive stability margins.  Stability margins ASM and PHSM are shown in Bode diagram in Fig. 11.1. 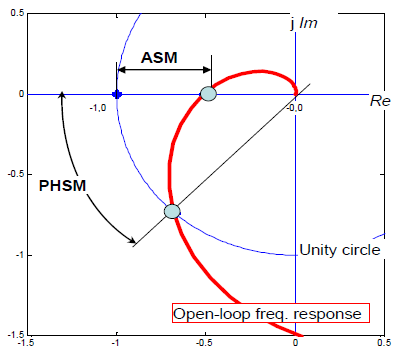 Closed loop is stable if the open-loop frequency response does not encircle point [ -1, j0 ].  By passing somewhere between the origin and point [ -1, j0 ] it exerts some ASM and PHSM, as shown in fig. 12.1.  “Closed loop is stable” means that the transients converge to zero after a time.  However, an existence of ASM and PHSM provides no information on the transients damping.

Such information can be reached by a family of  αR = const circles, (where αR denotes resonant gain). It is sometimes referred to as Hall diagram.  The coordinate of the resonant gain centers is defined as:

Each circle radius is:

Looking at it as a curves pure mathematical parametric description with 0 < αR < ∞ being a parameter, it presents a family of circles shown in fig. 12.2. 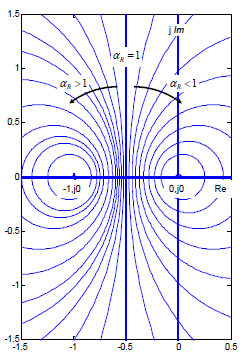 In most control problems the closed-loop transfer function has one or more pairs of complex poles.  Even in a case when closed loop is stable, the transients would most probably be oscillatory.  That brings up a phenomenon of resonance.  What we are interested in is the range of αR > 1.  It means that the left-hand side of the plane in fig. 12.2 is what is relevant only, as is shown in fig. 12.3. 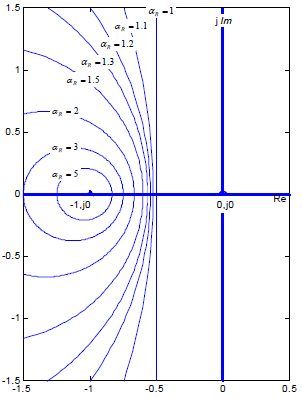 The second order oscillator is detailed in Chapter  10.6.  The dynamics of a 2nd order stable system that is characterized by a single pair of complex poles has been presented there.  The meaning of damping ratio and the resonance was explained as well.  There is a relationship between resonant gain αR and  damping ratio ζ :

There is also an expression for the opposite direction, expressing ζ as a function of αR :

As per the above relationship unity resonance gain αR  = 1 corresponds to the damping ratio ζ  ≈ 0.7.  That is considered as the optimal value for the closed-loop dynamics in most control applications.  It offers the fastest transients fading without much risk of the resonance.

To get some idea about closed-loop transients damping there is a presentation in  fig. 12.4.  It shows the step responses for several characteristic values of damping ratio ζ and corresponding resonance gain αR . 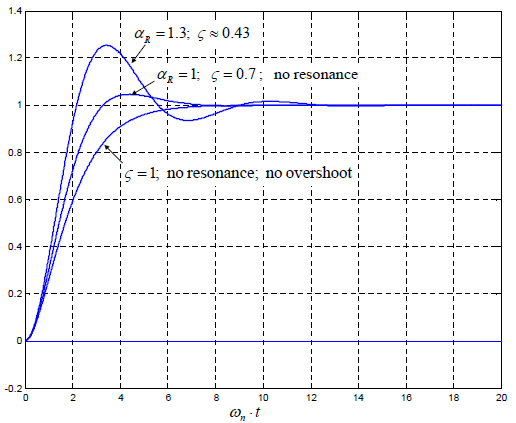 Additionally it touches the circle αR  = 1 .3.  It would mean that the closed-loop transients will be damped at the damping ratio ζ ≈ 0.43 and would look as presented in fig. 12.4. 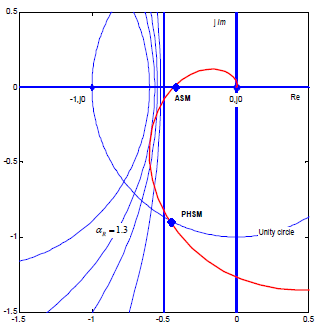 There is a question hanging at the end of this chapter:  What could be a benefit of bothering with the open loop frequency response in Nyquist diagram when the information of the closed loop dynamics is obtainable?

The answer is simple. Due to the fact that the open loop structure is commonly characterized by a serial blocks connection, the influence of each blocks to the overall open loop frequency response is much more transparent than its influence to the closed loop behavior.