As per http://www.thefreedictionary.com/turbine definition of turbine is “Any of various machines in which the kinetic energy of a moving fluid is converted to mechanical power by the impulse or reaction of the fluid with a series of buckets, paddles, or blades arrayed about the circumference of a wheel or cylinder”.

With steam turbine the moving fluid is steam.  It expands from the inlet to the exhaust pressure.  Steam energy is first converted into velocity.  It is done in the turbine stator.  At the rotor it is further on converted into mechanical work.  With reaction type turbines the conversion into velocity is party done at the rotor as well.

Unlike gas turbines steam turbines are normally designed for each particular application.

Steam Turbine Thermodynamic page here brings a simplified core steam turbine design.  The calculus is based on the input steam parameters and design conditions.  It predicts the design operating point and the expected output.

Additionally it allows you to asses the unit operation with input/exhaust pressures that are different than the designed ones.

The calculating methodology  is a legacy of Jugoturbina.  Jugoturbina was a steam turbine manufacturer in former Yugoslavia.  The major part was acquired by BBC in 1990.  Later on it became a part of Alstom to be acquired by GE recently.

Web modified  steam turbine design template is put here for your non-commercial use.

It calculates power to be generated in case of input inlet steam parameters and discharge pressure.  It also takes two main design parameters, inlet and izenthropic efficiencies as inputs.

The inputs are listed below:

It is a measure of how much pressure has been lost at the steam inlet valve(s).  The steam valve(s) are necessary component needed to operate unit in a controlled manner.

Inlet efficiency (eff_in_dsg) is defined as:

The pressure after the valve(s)  (p1_dsg) is calculated as:

Larger size valve(s) cause less pressure drop however, there is always a compromise between costs and benefits. Normally eff_in_dsg would be somewhere between 95-98%.

It is a measure of thermodynamic/aerodynamic quality of energy conversion within turbine. 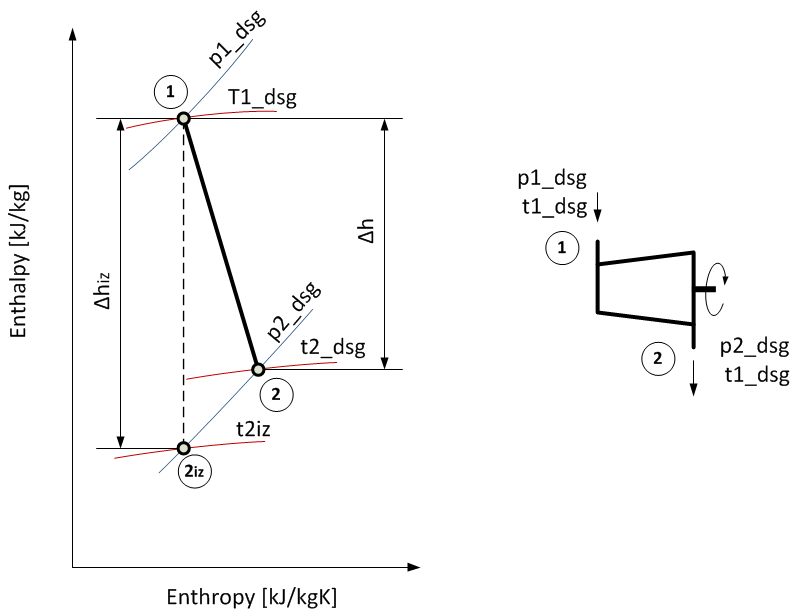 Izenthropic efficiency picks up all kind of losses involved with the turbine process.  In a case of the izenthropic process the expansion would end up at temperature t2iz however, as a part of the available energy is through friction and other losses converted into heat the real exhaust temperature is t2_dsg that is always higher than t2iz.  Turbine manufacturers calculate eff_iz_dsg with an utmost scrutiny as this guy is a strong indication of the overall quality of the whole unit.  Its value differs from case to case, even from row to row within the same turbine.  A normal range of eff_iz_dsg would be somewhere between 60-94%.

For the same reason it is assumed that the inlet steam temperature (superheated steam)  or steam wetness (saturated steam) remains the same as in the design mode.

These two assumptions makes this off design calculus best fit for assessing an off design behavior for units that are used with geothermal, CTCC and other application where steam turbine is supposed to operate mostly full load.

Off design steam flow is assessed as per Stodola Cone.

The design inlet efficiency as well as the  isentropic efficiency are re-calculated for the input off design conditions.