ThreeP is a simple discrete control that behaves similar like a continuous PI loop.  We call it ThreeP because the output can take only three states OPEN (1), CLOSE (-1), DO NOTHING (0).  In the US it would be called something like bang-bang with hysteresis.  It can be used to drive MOV-s or similar.

Back then in late sixties our controls teacher prof. Sherman picked it up from some German control paper. Taught us  how to understand, use and tune it.

In this simulation ThreeP loop is controlling the level in a kanta.

Kanta is a colloquial term for vessel.  The term is used by common people all around Balkans regions.  As kanta sounds a bit rough in the local language the term  doesn’t have much of an academic use.

Back then at university Sherman was using kanta to get  us closer to understanding the control theory.  He was teaching us how to watch, model and understand dynamic processes using kanta and water in it.  Used to say, ones you master water levels in kanta you can easily switch to turbines or anything else.  I guess the kanta approach worked well for me.

For years already I’m carrying ThreeP around the world with me.   A lot of things changed in control theory since late sixties however, this genius design still stands strongly.

Have already used it several times. The first time it was for Wayang Windu Integrated Control.  The most recent application is the SPEED-LOAD turbine control concept.  ThreeP is a key element there.  The SPEED-LOAD enables several generator units to run in parallel with each other.  All units to run in isochronous  mode,  sharing load equally without any load sharing device needed. 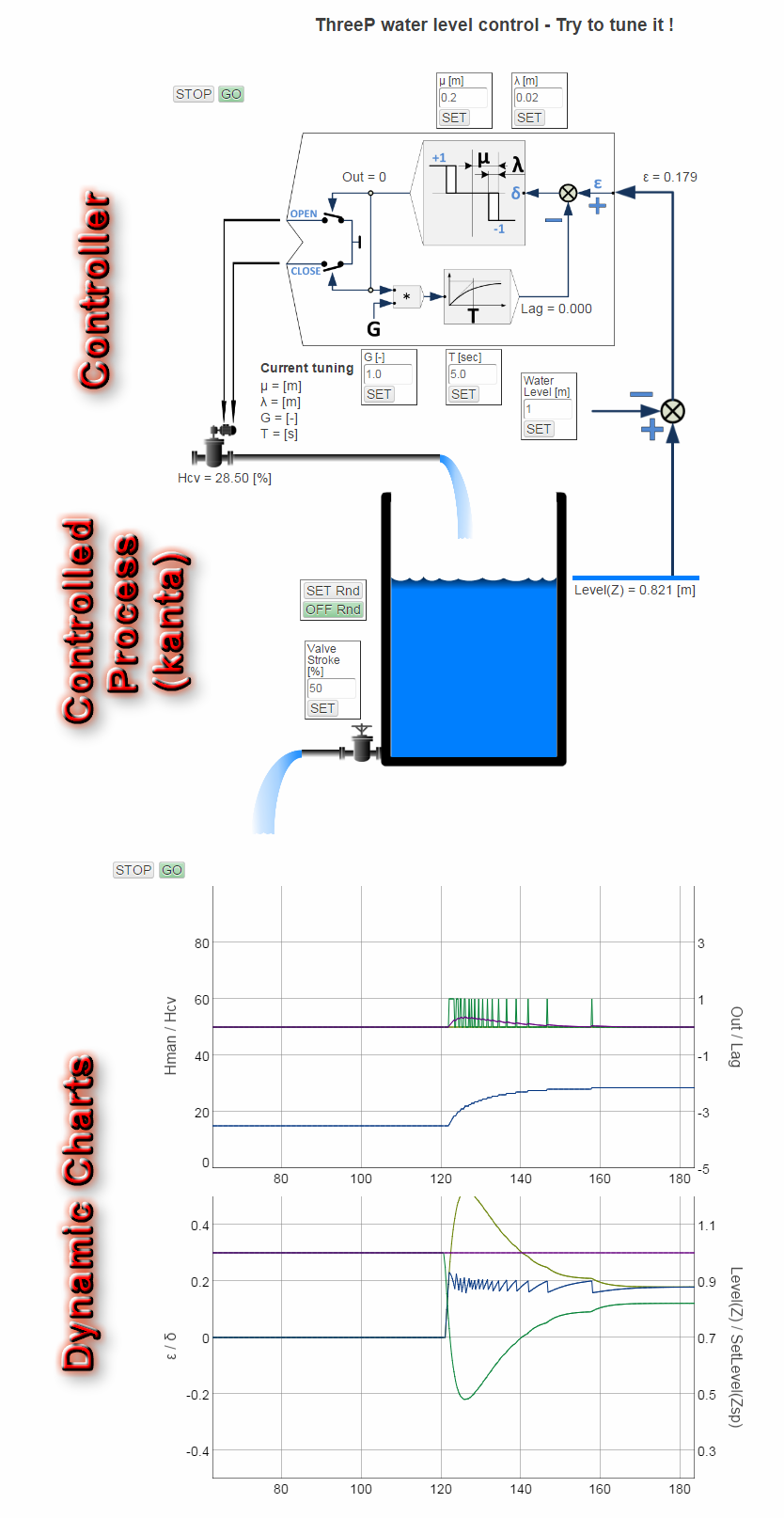 The simulation page consists of three sections, the controller ,  the kanta and the dynamic charting at the bottom.

The ThreeP diagram at the simulation page is quite explanatory by itself.  It shows how this thing works.  Send me a note if you are interested in some specifics details.

As you could see the ThreeP there doesn’t work so well.  It reacts sluggishly and doesn’t maintain the level.  It cant reach even close to the set point level.  It is deliberately left not tuned.  The tunables are:

Try to tune it better.

Setting the kanta discharge valve to a particular stroke introduces a step change.  The switch “SET Rnd” brings in a random stroke.  The same is eliminated by the switch “OFF Rnd”.

The current settings are displayed upon any setting update.

You can freeze the simulation at any time by clicking one of STOP buttons. Button GO unfreezes it back.