Poles of the transfer function (4.3) are the roots of its denominator which is a polynomial of n-th order.   Depending on the polynomial coefficients there can be some complex roots.   As in physical systems all the coefficients are real numbers so the complex roots always appear in conjugate pairs.  A pair of complex poles of the transfer function (4.3) has a form of

Transient corresponding to such a pair of complex poles is a damped oscillatory function:

Although the poles Cartesian coordinates σ0 and ω0 completely define the shape of the corresponding transient, each of them separately contains very reduced information on the transients shape. It is shown in fig. 10.21.

Figure 10.21 Two different transients for the same σ0, but different ω0 values.  The envelope is the same, however the damping is completely different.

Figure 10.22. Definitions of natural frequency ωn and damping ratio ζ  by means of polar coordinates of poles in the complex plane

Damping ratio  ζ  provides the information on the transients shape regardless of the frequency.  Natural frequency ωn determines solely the time scale in which the transient occurs.  This is demonstrated by unity-step responses in fig. 10.23.  Four different damping ratio values responses are plotted against the relative dimensionless time axis.

Second-order oscillator transfer function in its original form (10.16) is a special case of (4.3).  However, in this form it gives no idea about the dynamic properties of the block itself.

Therefore it is more convenient to express it in terms of natural frequency ωn , damping ratio ζ , and static gain K as it is shown in fig 10.24. 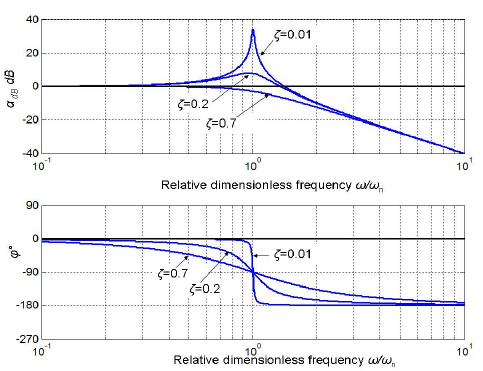 The peak in the amplitude-frequency characteristic indicates the resonance.  Its prominence rises with lowering the damping ratio.  The range of ζ as presented in fig 10.25 is 0.7 > ζ > 0.01 .  The  extreme value of dynamic gain is denoted by αR and named resonance factor.  It rises from 1 to infinity with lowering ζ value.  Interrelation between resonance factor αR and damping ratio ζ is defined by (10.18).  It is graphical presented in fig. 10.26. 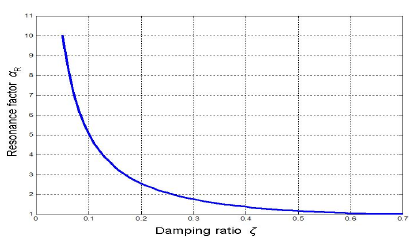 The resonance manifests itself when an oscillator is excited by a harmonic input with the frequency close to ωn.  The resonance factor αR occurs at the frequency ωR which is slightly different then the natural frequency ωn. The difference between these two depends on the damping ratio ζ as it is shown in (10.19).

Note
Closed-loop systems quite easily manifest oscillatory behavior.  They are usually of a much higher order then the second one.  However, the second-order oscillator dynamic properties are pretty well applicable to them as well.  It is because their dynamic properties are determined mostly by the closed-loop transfer function poles that are the nearest to the complex-plane origin.  If those are a pair of conjugate complex poles, the system transients and resonant behavior will be more or less similar to that of a second-order oscillator with the same complex poles.
One should be aware of the fact that stability and resonance are things of a different nature.  Stability is bound to the convergence of the transients (solution of homogeneous differential equation) which depends solely on the system structure and parameters.  Instability will manifest itself regardless of a perturbation which provoked the transients.  On the contrary, resonance is a property of a differential equation particular solution which occurs only in case of a system  periodic perturbation at a frequency close to the system resonance frequency.