In control engineering, this elementary block is named first-order lag or PT1. Its only parameter is referred to as time constant  denoted by T , where

First-order lag as an autonomous component is most often made by closing a negative unity feed-back around an integrator, as is shown in fig. 10.10.

Relationship between the output y(t) and input x(t)  in the time domain is defined by the equation: 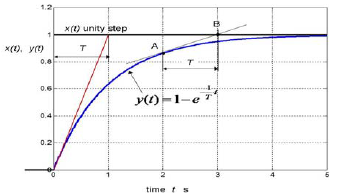 The step response provides an information on a shape of the monotonic summands in the complex system’s transients – chapter 5.  The shape is defined  by time constant T influence on the respective exponential function eσ0t with σ0 < 0, (for all the converging parts of the system  transients).  A time period between point A and point B is always equal T.  Point A is any point where the tangent touches the curve. Point B is the point where the same tangent intersects the horizontal asymptote.   Point A can be located anywhere at the curve itself.

Frequency response of a first-order lag in Nyquist diagram is presented in fig. 10.12.  It is always a halve-circle with the unity diameter regardless of the time constant T value. 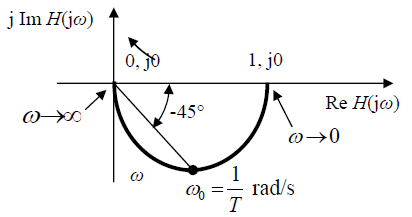 A first-order lag frequency response in Bode diagram is shown in fig. 10.13.

In a low frequency range, where

In a high-frequency range, where

, the characteristics coincide with their asymptotes that are resembling the properties of an integrator.  The slope of the amplitude-frequency characteristic asymptote equals -20dB/decade, and the phase shift amounts -90° in the whole high-frequency range.  Any variation in T would move the characteristics in the horizontal direction.  Their shape always remains the same. 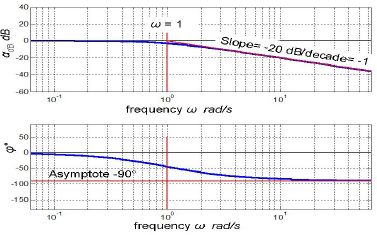